SPREAD YOUR PAYMENTS OVER THREE INSTALLMENTS INTEREST FREE WITH KLARNA

Free UK delivery on orders over £50 I am one of the most organised people you could meet, I plan and prepare for almost everything. My Christmas shopping starts in August, I use my diary like a bible and I make sure I am on time, every time. So obviously finding out we were pregnant the research phase began, reading medical journals, blogs and websites. I kept hearing the word Hypnobirthing, so looked into it a bit further. I think a marketeer needs to take hold of it and change the perception, I thought it would be about hypnotising myself and mentally getting through the pain without drugs. Whilst there is a strand of truth to this it was so much more than that, it is about understanding what will happen, what decisions you can make during labour, understanding what we as a couple wanted to happen and ultimately being prepared for the journey ahead as much as possible.A friend of a friend had recently trained to become a Hypnobirthing practitioner on her journey to midwifery, so after getting a slightly bemused look from David that he would be at these sessions, he ended up just nodding and we booked to have 4 sessions with Gemma in the 4 months prior to our due date. We are two very busy people with full-time jobs, volunteering roles, dependant extended families, sporting hobbies and a four legged fluffy boy, with this in mind we went with having private sessions at our home in the evenings so it fit around our hectic lives.

The first session we discussed our fears and concerns. What it was about labour that we were nervous about to plan out what we needed to discuss during our sessions. We also talked about understanding the human body and its natural and primal response to labour. The importance of positivity and shutting out those negativities and horror stories every other person wants to share with you.

The second session focused on breathing and anchors which can allow you to focus, whether that be a memory in your mind of that sunset, the smell of your favourite flower or a certain way your partner holds you. Each session ended with a breathing exercise to music. As someone who is fairly active I started up Pregnancy yoga after our 12week scan and within this there is the golden thread breath which allows you to learn to control your breathing and this had prepared me for this exercise.

The third session we talked about medical protocols and the options available to you, the pro's and con's surrounding induction, and the role of the love hormone oxytocin. This was so insightful, we never considered many of the elements around hospital protocols.

The fourth session we did a recap and review. Did we cover all of our fears? did we feel like we were more informed about labour? more in sync with what we wanted to happen? and did we both know our roles in the adventure ahead?

Whilst some of the content I had some experience and knowledge of, through my Sports Science degree or general reading around labour, it was actually so informative for David. He’s a man, he’s never had to give labour a second thought other than he would have a baby at the end of it. This knowledge and information gave him so much confidence and understanding, he knew I needed him and he had a role to play. He was exposed to a broad spectrum from the role of oxytocin to the importance of skin to skin contact with baby.

These sessions also allowed David and I to have a genuine conversation about what to expect, what we wanted, what his role would be during labour and how he could support me, and moving towards our due date I knew I had my partner in crime on completely the same page ready to be my voice.

Having them at home really allowed us to be open and honest in an environment we were comfortable with and not influenced or distracted by the conversations of others. We totally focused on us and our experience and expectations.

When labour eventually showed itself my breathing was exactly what it needed to be, long deep exhalations during each contraction, now I’m not saying I breathed through the pain as I’d totally be lying and the Entonox (gas and air) definitely got me through the majority of the pain but the breathing kept me focused so I didn’t lose control. Our midwife Michelle even commented on how in control my breathing was. 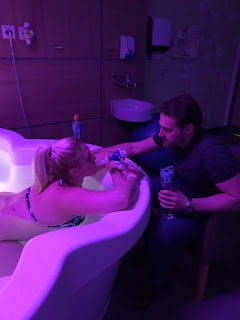 I didn’t realise how liberating it would be to have David as my voice, in nature you don’t have animals being watched and examined by other animals, this allowed me to completely shut out the world and just breathe! He answered all the questions around Vitamin K and placenta jabs, whether we wanted to have the birth in the pool or not, all things we had discussed. I’ll save the labour story for another day but safe to say our sessions with Gemma totally prepared us for what to expecting when you’re expecting (Emoji) and we could not recommend it more highly. If you live in the Berkshire/Surrey area I would definitely say get in touch with Gemma (Hypnobirthing Bracknell)

Otherwise give Google a search for a practitioner near you.

View all
View all
x